You deserve a PMS free life! Get the latest recipes & lifestyle tips to bring your body back into balanceSign me up!
You are here: Home / Health / Gluten free baking without eggs
Share Tweet Pin G Plus Email
42 shares 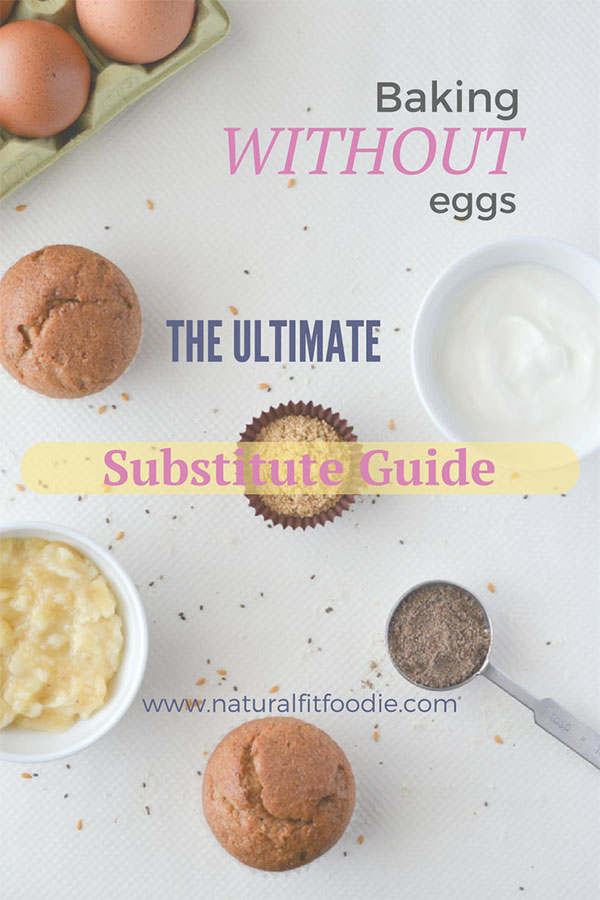 I remember when I first discovered that eggs were a problem for me. I wanted to cry. My first egg free attempts in the kitchen were not the best but over time I’ve nailed it and you can too.

I never really knew how complex eggs were until I read  Alton Brown’s book I’m Just Here For More Food In the book he goes into great detail about the function of eggs in baked goods.

Eggs are made up of fat, protein and some water. They are major structure builders and without this structure, many baked goods – especially those that contain little or no gluten, like cakes – would lie in the pan, hollering I’ve fallen and I can’t get up’ (source I’m Just Here For More Food)

Did you know that egg yolks and egg whites play separate roles in baking?

Egg yolks performs the role of emulsifier. That means it combines ingredients that would not ordinarily combine. Such as oil and water.

Egg whites perform the role of leavening. They make cakes light and airy.

So as you can see baking without eggs will be no easy feat, ESPECIALLY in gluten free, dairy free baking!

What Eggs Do in Baked Goods

Eggs are one of the hardest ingredients to substitute because they perform such a crucial role in baking. They’re used as binders, leavening agents and for moisture/structure.

Eggs as binders : The egg proteins act as the glue that holds the ingredients together while baking. When they are beaten and heated, they change the liquid mixture to a solid state which helps to prevent crumbling. If the recipe contains only one egg but contains a leavening agent such as baking powder or baking soda then the egg is the binder.

Eggs as leaveners aka rising agents : Beaten eggs incorporate air into the batter, which will expand in the oven and cause the baked good to rise and become light and fluffy. If there are no other leavening agents in the recipe such as yeast, baking soda and baking powder, then the egg is being used as the binder and leavening agent.

Eggs also add moisture and texture to baked goods: If the recipe doesn’t call for any other liquid, then the egg is the binder AND the moisturiser.

What can be used instead of eggs in baking?

If you can’t imagine life without banana muffins don’t despair! When it comes to substituting eggs in baking you’ve got many options but it all depends on what you’re baking.

So let’s take a look at the different type of baked goods and what egg substitute is best for each.

The following options replace ONE EGG in recipes.

Ground flax + water : Mix 1 tablespoon of ground flaxseeds with 3 tablespoons of warm water. Let it rest for five minutes until it becomes a gel. You may use pre-ground flaxseeds or grind them yourself in a spice or coffee grinder.

Ground chia + water : Mix 1 tablespoon of ground chia with 3 tablespoons of warm water. Let it rest for five minutes until it becomes a gel. You may use pre-ground flaxseeds or grind them yourself in a spice or coffee grinder.

Psyllium husk :Psyllium is a form of fiber made from the husks of the Plantago ovata plant’s seeds. It sometimes goes by the name ispaghula. Psyllium husk is most commonly known as a bulk forming laxative and is actually the main ingredient in Metamucil a fiber supplement often used to reduce constipation. Read more on the health benefits of psyllium husk here – Psyllium Benefits

The following options replace ONE EGG in recipes.

Use a combination of  flax or chia (for binding) along with one of the following for moisture/texture:

Pureed Fruit / Vegetables –  Note :these options may alter the density and taste of  your recipe

The best egg substitutes for cookies, brownies and bars.

Depending on the result you’re trying to achieve with your cookie or brownie or bar you will select the appropriate egg substitute. For a soft tender crumb use fruit or vegetable puree. For a tougher crust use flax or chia.

Agar is a seaweed extract that has properties similar to gelatin. Dissolve 1 tablespoon agar powder in 1 tablespoon warm water. Whisk well, and then chill. Whisk again and use.

When baking gluten free, dairy free egg free you can use all the help you can get! To give your baked goods a boost and help them rise,utilise this tip!

Replace the milk or water in the recipe for

What about commercial egg replacers

Ener-G egg replacer is unique blend of starches and gums. This makes for a great all round egg substitute.

For a quick and easy egg ‘less’ wash mix one teaspoon of arrowroot starch with one tablespoon of water.

With the proper egg substitution, baking without eggs becomes a breeze!