You deserve a PMS free life! Get the latest recipes & lifestyle tips to bring your body back into balanceSign me up!
You are here: Home / ovulatory phase / Blueberry Cauliflower Smoothie (low carb,keto,paleo,vegan)
Share Tweet Pin G Plus Email

This thick and creamy blueberry cauliflower smoothie is a low carb delight. If you’re new to vegetable smoothies it’s sure to make you a convert.

I think smoothies are one of the easiest ways to consume a variety of nutrients in one serving. Smoothies are super easy to make and very easy on digestion as your blender does most of the work breaking down the fiber.

That said I know there are folks who struggle to make balanced smoothies.

Read on to discover how to make a smoothie that’s healthy AND tasty. Because smoothies can be a complete nutritionally balanced meal if you do it right.

How to make a smoothie more filling

To make your smoothie filling and stand on its own as a complete nutritionally balanced meal you need to make sure all three macronutrients are present and accounted for in your blender.

That means your smoothie should contain carbs/fiber, protein and healthy fats.

What to put in a smoothie

Unless you’re making a dessert smoothie I would suggest you have vegetables form the bulk of your smoothie, add a serving of low glycemic fruits and a swish of healthy fats and you’re good to go.

Here are some examples of foods from each macronutrient group to give you a better idea as to exactly what to put in a smoothie to keep it healthy and balanced:

Complex carb veggies such as


Why put cauliflower in a smoothie

Why not put cauliflower in your smoothie I might ask?

Well yeah I do admit it’s a bit strange at first but that’s because most of us are used to piling up on the fruit in smoothies and while there’s nothing wrong with fruit. It’s time we start re-thinking what smoothies should be and taste like.

Cauliflower is a low carb high fiber veggie that will make your smoothie thick and creamy without added sugars. If you’re worried about this smoothie having a cauliflower taste, don’t be.

I mean if you can make cauliflower pizza why not a Blueberry Cauliflower Smoothie, right?!

Your PCOS diet should contain little to no sugar if you wish to keep your symptoms at bay. 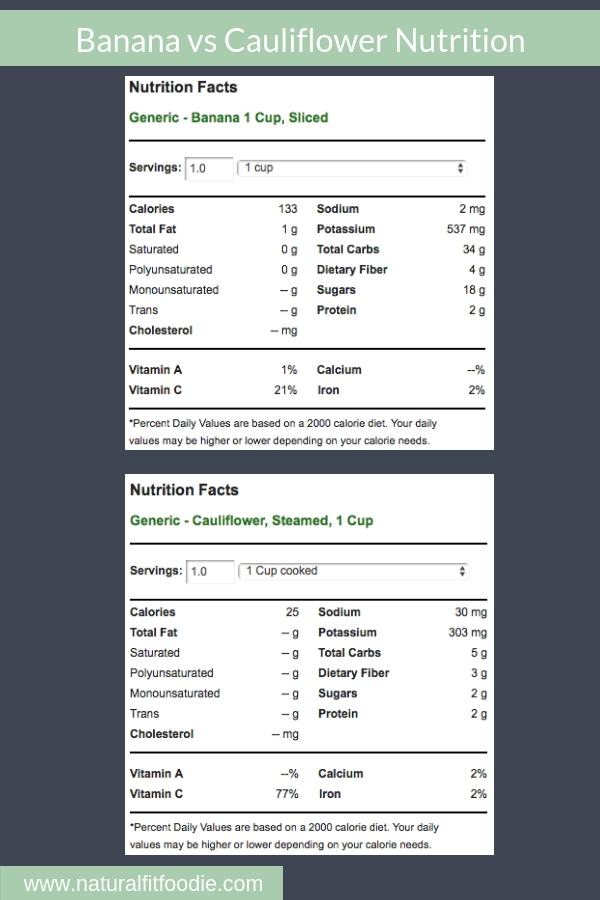 As you can see, if you are someone who needs to keep carb and sugar intake low then cauliflower is definitely the way to go!

Also if you add banana to this smoothie it will not have this beautiful purple colour as banana will make it turn brown.

How to make a cauliflower smoothie

To fully reap the health benefits of this Blueberry Cauliflower Smoothie you want to make sure that your cauliflower is steamed or cooked in some way before using it in your smoothie. That way you will avoid any gastrointestinal distress like gas and bloating.

I usually purchase a head of cauliflower, dice it up into florets, steam it then freeze it for later. One tip on freezing veg and fruit is to flash freeze them first. This way you can thaw and use just the amount of cauliflower needed, rather than having to thaw larger chunks at once.

The total calories for this smoothie might appear on the higher side but that’s due to the much needed healthy fat from the MCT oil.

So tell me what do you think? Will you give this Blueberry Cauliflower Smoothie a try?