You deserve a PMS free life! Get the latest recipes & lifestyle tips to bring your body back into balanceSign me up!
You are here: Home / Recipe / Caribbean Jerk Pork Shanks
Share Tweet Pin G Plus Email
8 shares 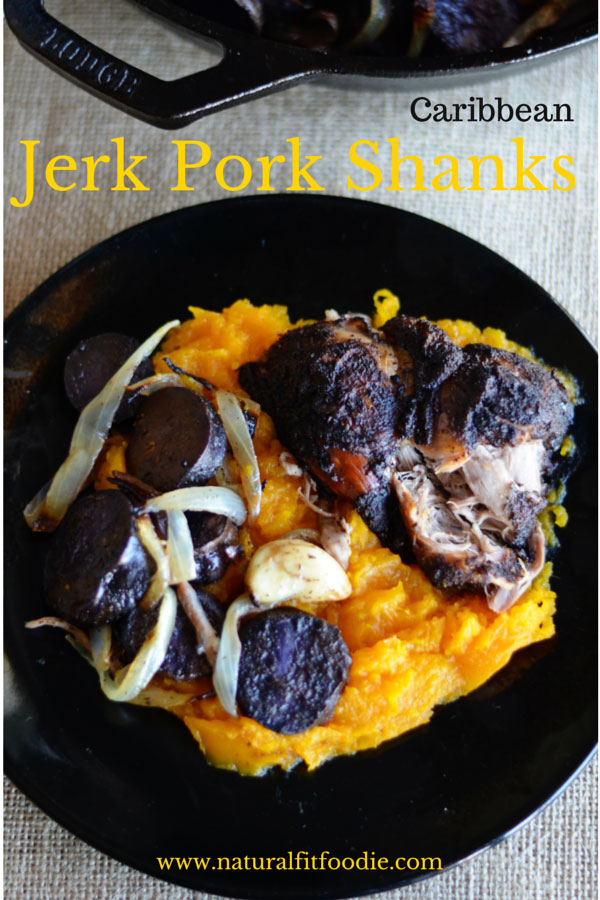 These Caribbean Jerk Pork Shanks start on the stovetop and finish off in the oven for meat so tender that it practically falls off the bone. I have had it with frying pans. Teflon, ceramic they’re all the same.

They last for a few months then the coating starts to wear down and it’s all downhill from there. I’ve always wanted a cast iron skillet but the Le Creuset ones I saw in El Corte Ingles (Spanish version of Macy’s) cost 100 euro plus.

After my last frying pan died though I started to do some more research and found the company Lodge. Their cast iron skillets were reasonably priced and available for delivery on the spanish amazon site. I ordered this cast iron skillet

and started plotting the first dish I would make in it.

Jerk pork is a popular dish in the Caribbean. Everyone loves a good jerk pork. A crowd favourite at beach limes or cricket games. One wouldn’t normally use pork shanks for jerk pork but I am anything but normal. Pork shanks are an affordable cut of meat but do require a lengthy cooking time. This dish starts on the stove top and finishes off in the oven. It’s a one pot meal thanks to my cast iron skillet.

The meat was tender and practically falling of the bones. As it bakes, your whole house will smell AMAZING! Sort of christmassy, if that’s even a word. Later it occurred to me that even though we may not associate jerk seasoning with Christmas the spices used are essentially the same as in Christmas cakes and mulled wine.

I added some garlic, onions and purple potatoes coming to the end of the cooking time. Serve over some roasted pumpkin and my guess is this would fit right in at your table.

Please share this post to give your family and friends a chance to try out the recipe too. 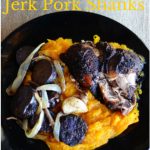 Print Pin
No ratings yet

Do not be tempted to move them around. We’re looking to form a nice crispy crust.