You deserve a PMS free life! Get the latest recipes & lifestyle tips to bring your body back into balanceSign me up!
You are here: Home / Recipe / Roasted Chicory Root Coffee Alternative Recipe
Share Tweet Pin G Plus Email
113 shares

Do you love your morning of cup of coffee but worried about caffeine overdose? Roasted Chicory Root Coffee just may be the answer you’re looking for.
Jump to Recipe Print Recipe

Roasted chicory root coffee may be the answer you’re looking for if you have to forgo coffee and need a beverage that’s a bit more robust than tea.

What is chicory root coffee?

How to buy roasted chicory root

How to make chicory coffee substitute

Brewed roasted chicory root coffee alternative SMELLS just like coffee. So when you first taste it you might be put off if you go in with a mindset that it should taste like coffee. It doesn’t. It has a very unique taste and while it does have a coffee like depth and flavor it’s not coffee.

Why put chicory in coffee?

If you’re a heavy coffee drinker looking to slowly wean yourself you may want to experiment with a mix of chicory and coffee beans. Simply add 1 teaspoon of ground Fair Trade coffee and Organic Roasted Chicory Root to your vessel and brew with water.

A bit of chicory coffee history

Chicory coffee has been made famous by New Orleans coffee shops and cafés, but this beverage is centuries old.

During the time of the Continental Blockade in France when coffee supply was limited, the French began drinking roasted chicory coffee as an alternative. Chicory coffee was then brought to New Orleans by the Acadians, who were French settlers. In many parts of Louisiana you can find chicory being brewed in a French Drip Coffee Pot.

Chicory root contains inulin, a powerful prebiotic and soluble fibre. Inulin is present in many plants, but chicory contains the highest concentration. Prebiotics are food to the friendly bacteria in the gut.

Nourishing the healthy flora in the intestines is key to avoiding digestive issues like bloat, constipation and gas. In addition, studies have shown that chicory root increases the flow of bile, this helps to break down fat, thus aiding in digestion even further.

Ancient Romans used chicory root to help cleanse the blood, while Egyptians consumed the herb to help purify the liver and the blood. You can find chicory root amongst the key ingredients in Livatrex a 100% all natural formula that supports the normal process designed to detoxify the liver and gallbladder. If you have PMS or painful periods roasted chicory root coffee can especially benefit you by helping your body to cleanse itself from endocrine disrupting chemicals and excess hormones.

Chicory acts as an appetite suppressant due to its high concentration of inulin. Inulin is a soluble fibre and can give you a feeling of fullness, without raising blood sugar levels or increasing calories. It’s for this reason you will often see inulin as an addition to many meal replacement shake powders.

There are no known side effects to chicory but as with any new food you introduce to your diet do so with caution.

Chicory root is commonly known as a coffee substitute or as an additive to coffee but as you can see there’s so much more to chicory root than meets the eye.

I am not a big coffee drinker, however I do find the aroma enticing. Especially during winter I tend to crave something a little stronger than tea. Roasted chicory root coffee (with scones) is the solution!

Will you give it a try? 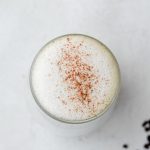