You deserve a PMS free life! Get the latest recipes & lifestyle tips to bring your body back into balanceSign me up!
You are here: Home / Health / What is Buckwheat
Share Tweet Pin G Plus Email
1 shares 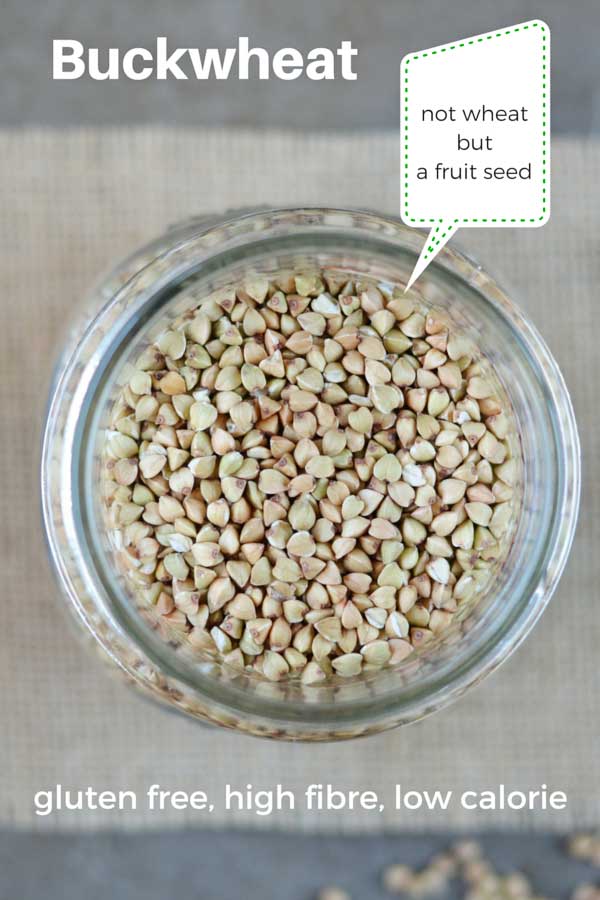 What is buckwheat, it’s health benefits and delicious recipes to get you started on this amazing food! Your body and your taste buds will thank you. There is a desire these days to follow the healthiest and best gluten-free foods on the planet, and buckwheat is one that shouldn’t go unnoticed. It ranks right up there with quinoa and amaranth.

But what is buckwheat and why should you care?

Buckwheat is a pseudo-grain. That means that it’s not from the traditional family of grain that we use like other cereal grains, but it is often eaten in the same way.

This amazing food dates back to 6000 BCE where it popped up as a staple crop in Southeast Asia. It then became highly valued for its nutritional content and spread throughout Asia and Europe. Today it is found all over the world and has taken the place of many traditional grains.

Buckwheat is very adaptable making it a great plant for both the earth and for our bodies. Many people use buckwheat as the first crop in their fields due to its adaptation abilities. It is able to live in soil that is more acidic, which is where many other plants fail to thrive. This adaptation to acidic environments makes it a great go-to food for people who are working on curbing the acidic environment of their bodies which can be a result of poor eating habits.

What is Buckwheat Used for?

By now you might be wondering what is buckwheat used for? Buckwheat likes to show up in various foods, and due to it’s easily blendable flavor you might not immediately notice it. That’s one of the great benefits of eating healthier food options, especially since our bodies love them so much.

Buckwheat can be eaten in multiple forms! You can have it as a groat in granola which is simply the term used to identify a whole grain since it still retains the nutritional benefits that many grains are stripped of during their processing. You can also find this amazing food in the form of a flake or flour. Which you may add to breads, pancakes or use to thicken up soups. Another option is to eat buckwheat in the form of a noodle. As you learn to love the grain you’ll find that you prefer using it as the main course due to its versatility and earthy taste.

The Health Benefits of Buckwheat

Amazingly, buckwheat ranks at the top for amino acids, which is no easy feat. Buckwheat is an overall low calorie food that offers 13% of our daily protein needs and 10% of our fiber needs.

How to Prepare Buckwheat for Improved Digestion

You can prepare buckwheat like you’d prepare any other pseudo-grain. One method is to turn it into a sprout, or you can go even further and turn it into a microgreen. Both options are great for getting a quick boost in energy from the high protein content, and both aid in digestion by providing your body with valuable fiber.

Turning buckwheat into a sprout is a simple process. First you’ll want to soak a handful of the pseudo-grains in some water overnight. By doing this, the grain will engorge with water allowing the outer shell to more easily break off which exposes the plant. Next you’ll want to place your emerging sprouts into a jar or bowl and give them a rinse of water about once a day. In less than a week you’ll see the sprout of the plant appear. Feel free to eat the entire sprout at any time.

For a more nutritious option, you can turn buckwheat into a microgreen. This process involves actually planting the buckwheat and then sprouting it. It’s not unlike sprouting it using the method above or growing it like you would any other plant. What you end up with though are more densely nutritious leaves, since eating one microgreen is equal to three times the nutrition of its sprouted counterpart.

There are numerous recipes for buckwheat which include using them in their sprouted forms.

Like other pseudo-grains, simply soften them and add them as a hidden addition to your favorite main course recipe. They go especially well in risotto. Or as an addition to your favorite parfaits? Isn’t that just gorgeous! Starting your day with a full flavoured warm buckwheat smoothie bowl will give you the energy you need to take on the day while also providing the fiber that your body craves. Get started on learning to love this amazing food! Your body and your taste buds will thank you.